How to measure ocean vertical velocity?

Direct measurements of three-dimensional ocean currents are carried out with acoustic Doppler current profilers (ADCPs). The ADCPs are usually moored and bottom mounted instead of being ship-based or attached to a floating mooring to minimize the vertical displacement associated with the vertical motions of the ocean surface caused by waves.

The ADCP does not measure horizontal or vertical velocities at a point but determines Doppler shifts along three to five acoustic beams that are typically slanted (most commonly 60°) from the horizontal plane and spaced around the horizontal compass. The most typical configuration (Janus) includes four orthogonal beans. The Doppler shifts measure slant velocities of suspended acoustic backscattering particles moving with the water relative to the instrument. Pairs of slant velocities are combined to produce vertical and horizontal velocities. The underlying assumption is that velocities are horizontally uniform over the beam separation. Other instruments (e.g., Teledyne Sentinel V ADCP) have an integrated fifth beam to provide a third vertical velocity measurement. 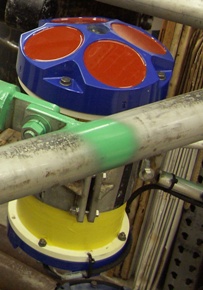 A completely different approach was recently introduced by Klein et al. (2009). It uses the surface Quasi-Geostrophic approximation to estimate low-frequency vertical velocities in scales between 20 km and 400 km from the surface down to 500 m. The needed data is some high-resolution Sea Surface Height (SSH, usually from satellites) and an approximation of the large-scale vertical stratification. Vertical velocities are estimated from the buoyancy equations at the surface and at depth in a modified version of the Omega equation (Hoskins et al., 1985).

As a non-oceanographer, I might approach this from a continuity standpoint. The sum of the fluxes in each direction must equal 0 (conservation of mass, basically). So you might have some measurements in the x and y directions, which could then give you at least an estimate of the vertical velocities in a given water column, assuming uniform lateral and vertical compositions. There are more assumptions you'd have to make, such as what is a reasonable water column size, that I am not privy too.

While I wouldn't use this in a scientific paper, I'd bet it would be a good enough initial calculation to see if some question is worth doing a more accurate method.

Just an idea... definitely not a definitive answer.

Not the answer you're looking for? Browse other questions tagged ocean oceanography ocean-currents or ask your own question.

22
How is ocean salinity measured from space?
10
How to estimate dispersion in stratified flows
11
What efforts have been made to separate the microseismic events related to wind-related ocean waves from the components of volcanic origin?
12
What is the area with the largest velocity vertical shear in the ocean?
4
What are the effects of underwater “windmills”?
7
How much garbage goes into the Pacific Ocean every year?
8
Direct measurments of vertical ocean mixing?
7
Why is ocean salinity not a good chronometer?
9
How is the distribution of Argo floats managed over the Earth's oceans?