I was wondering why are coal and petroleum being both fossil fuels are found at different places i.e. coal at land and petroleum at sea.

petroleum fossil-fuel coal
Share
Improve this question
edited May 8 '20 at 6:13

Coal, oil and gas can be found anywhere on Earth: on land and on sea.

The Japanese once mined coal from beneath the sea floor, using Hashima Island as the base of operations. The island is only 6.3 ha in size.

The British also mined coal from under the sea, in the north east of England.

As for oil, the following picture from USGS shows the current oil-prone petroleum basins in the world, outside of the USA. 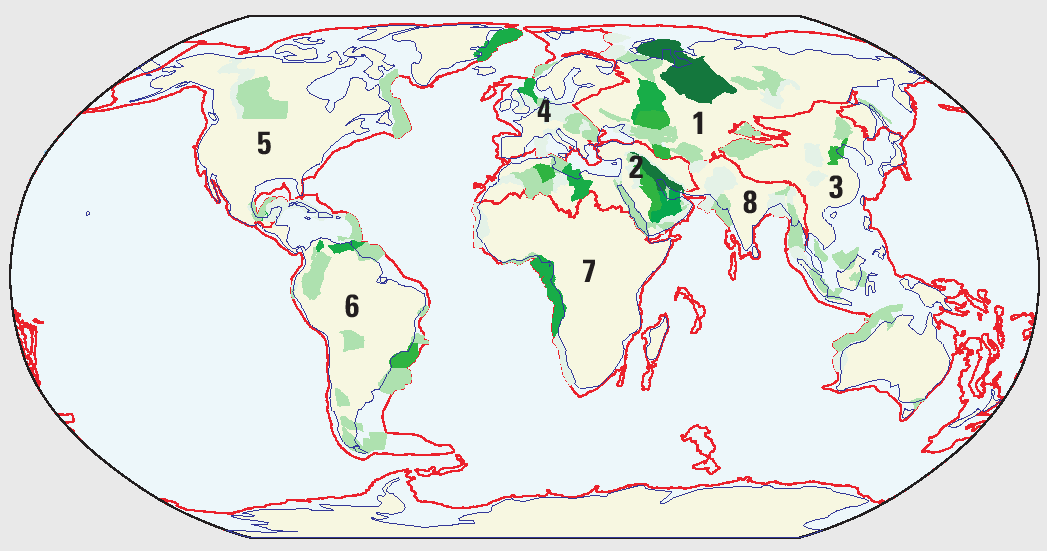 The following oil basins are all on land:

When oil & coal deposits formed they each had different mechanisms of formation. Coal is derived of plant material that once lived on land, died, formed peat, which then got buried.

Oil however, owes its origins to algae & plankton that lived in the oceans. When they died they sank to the bottom of the ocean and deposited in waters with very low, if any oxygen. Eventually, these deposits were covered by sediments. If the deposit was subject to a significant amount of geothermal heating gas deposits formed, otherwise oil deposits formed. Movements of the Earth's crust then repositioned some of the deposits which is why some coal is now under the sea and some oil is now on land.

There's no significant difference in distribution beneath land and sea. Recovery is all about accessibility. There's plenty of coal under the sea, but we just can't get at it - fortunately! To avoid carbon-driven disaster we have to leave most of the coal and oil where it is, under land or sea.

The places where you will find hydrocarbons not only require a buried source rock, but also a migration pathway, a reservoir, a trap, a seal, and all of it happening at the right time; you need a whole petroleum system.

I am sure that there are other constraints about where to find coal seams as well. For example, There are probably many coal seams that have been buried in a way that they are not accessible and are therefore not counted on those maps. But I'm not that familiar with the geology of coals.

Not the answer you're looking for? Browse other questions tagged petroleum fossil-fuel coal or ask your own question.

12
To stop anthropogenic climate change, is it necessary to stop extracting petroleum and start pumping carbon under ground?
6
Why is coal classified as a sedimentary rock?
6
Are there gases from the Earth useful to generate electricity besides “natural gas”?
0
Are fossil fuels really formed from fossils?
3
Coal self-heating and spontaneous combustion, how does this happen?
9
What is the most important source of natural gas? Coal, oil or other?
7
Where did all the CO₂ come from that was deposited as coal during the Carboniferous?