The atmosphere and the dispersion of greenhouse gases

I have been researching everywhere. At what level of the atmosphere do carbon dioxide and other greenhouse gases occur? I can't get a straight answer and am frustrated...

The short answer is that greenhouse gases occur at all levels in the atmosphere. However, the concentrations can vary with altitude. In the case of greenhouse gases that are always in a gaseous state like CO2, Methane and Nitrous oxide, they are evenly distributed throughout the lower atmosphere (i.e. troposphere and stratosphere below ~20km), (this question & answer explain why), with only minor variations in concentration. The only notable exception is water vapour, also a powerful greenhouse gas, water is the only one that do transition between liquid, solid and gaseous states within the atmosphere, something that have as a consequence that its distribution is not homogeneous like it is for the other gases.

The actual distribution of water vapour is highly variable, something that we all know from the daily experiences of a diversity of conditions like dry weather, fog, rain, etc. However, there is some clear patterns:

Vertically, water vapor abundance falls more or less logarithmically, as it can be seen in the following figure: 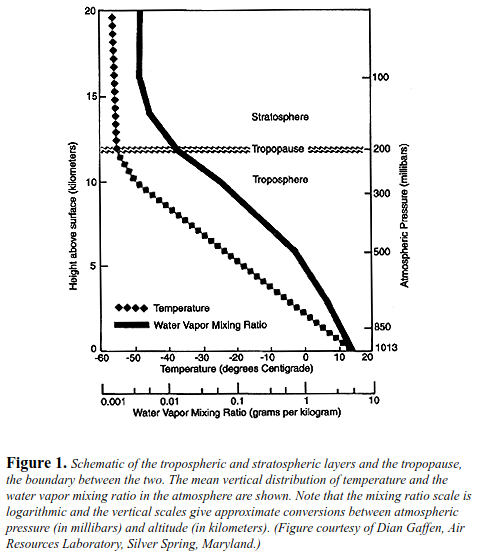 Horizontally, across the surface of the Earth, water it is much more abundant in the tropics than the poles, a pattern mostly controlled by temperature, because the capacity of air to hold dissolved water falls exponentially with temperature (as described by the first equation in my answer to this question). The following figure of the global mean water column derived from satellite data for 2009 will gives you a good sense of the typical distribution

(taken from Retrieval of total precipitable water from GOME-1, SCIAMACHY and GOME-2)

Now, if we consider higher levels of the atmosphere (>20 km), the mixing at that scale is not strong enough to smooth out the variations in concentration that arise due to the existence of sources and sinks for each greenhouse gas. For example, methane is produced in the surface by natural and anthropocentric sources, and the biggest sink (90%) is the oxidation by hydroxyl radicals (OH) in the stratosphere. This create a fairly large vertical gradient in methane concentration. A gradient that gets smoothed out by strong mixing in the troposphere but becomes very important in the stratosphere and mesosphere. Similar phenomena creates gradients of other greenhouse gases like N2O, Ozone, and to a lesser extent CO2. These processes are nicely explained in this paper, were the following figure gives a great summary of the changes in concentration of most gases in the atmosphere: 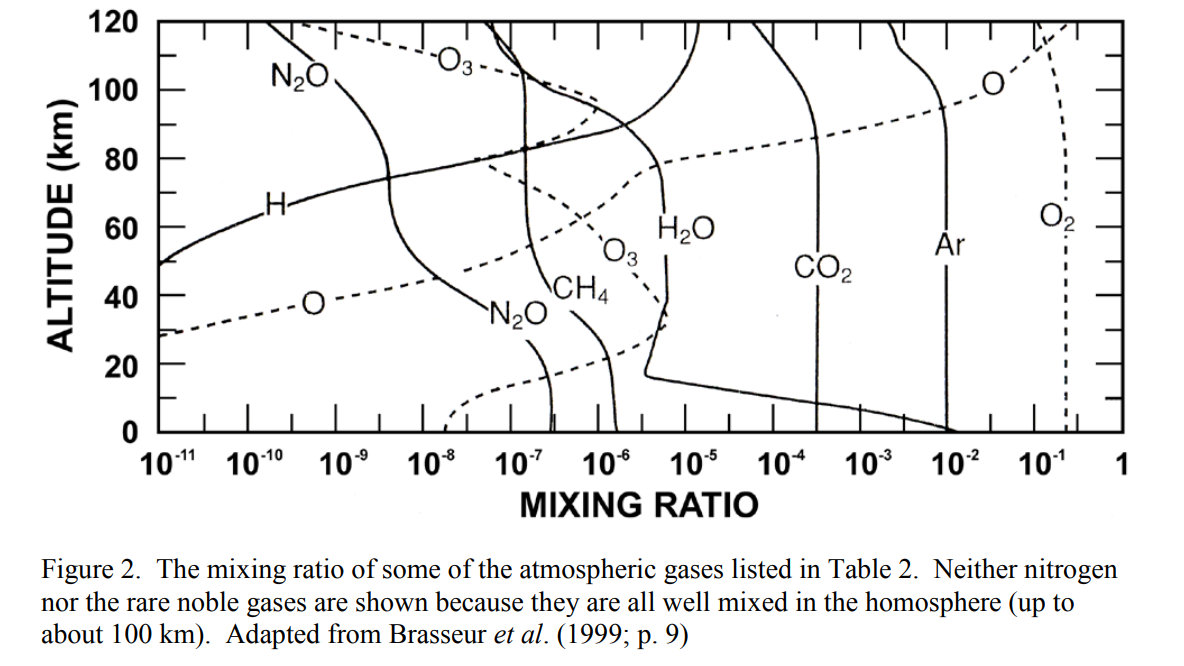 Here you can see that, CO2 keeps a relatively fix abundance throughout the atmosphere up to 120 km, while N2O is relatively very scarce above 60 km, and Ozone below 10 km.

Not the answer you're looking for? Browse other questions tagged atmosphere climate-change greenhouse-gases or ask your own question.

15
Why air do not suffer density stratification of its gaseous components?
6
How to calculate humidity using outside temperature and outside relative humidity?