How do I convert Sentinel-5p / TROPOMI vertical column density to concentration?

I am doing an study on Sentinel-5p TROPOMI images. I would like to convert the data from mole/m2 to μg/m3, for this I know I need the height data of the measurements. I have looked for them and I have only found for tropospheric ozone (6 km), would you know for CO, SO2 and NO2 the height of the vertical column?

Thank you very much, Irene B. 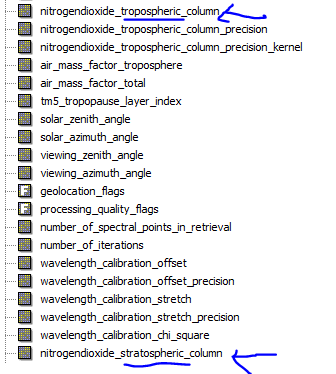 I understand that the height of the limit of these can vary, but I would like to arrive at an approximate average value.

The spectrometer on Sentinel-5P is TROPOMI. TROPOMI is an imaging spectrometer, meaning it measures the spectrum of top-of-atmosphere electromagnetic radiation at various wavelengths. Such a spectrum (the "level 1 data") may look like this:

Simulated TROPOMI spectra in the NIR and SWIR channels for a scenario from the global ensemble,

For most users, these spectra do not readily show what they are actually interested in. However, from these spectra it is possible to calculate the atmospheric composition of various trace gases, because each gas has its own unique spectral signature. How this works is too complicated to explain in a Stack Exchange answer, but is covered in text books and university courses.

For a down-looking instrument like TROPOMI, it is difficult to resolve vertical information. For some species (some trace gases) we may have a rough idea whether the quantities calculated are close to the surface or close to the top of the atmosphere, for others we really only have a clue about the total column amount (meaning the total amount between the surface and the satellite). Therefore, when a data product reports a column integrated amount, it is not possible to assign this to a specific height.

However, a retrieval may be more sensitive for some heights than for others. Maybe it mostly sees the top part of the column, maybe mostly the bottom part. One way to express this is by the averaging kernel. The averaging kernel tells you to what height the total column measurement is most sensitive: 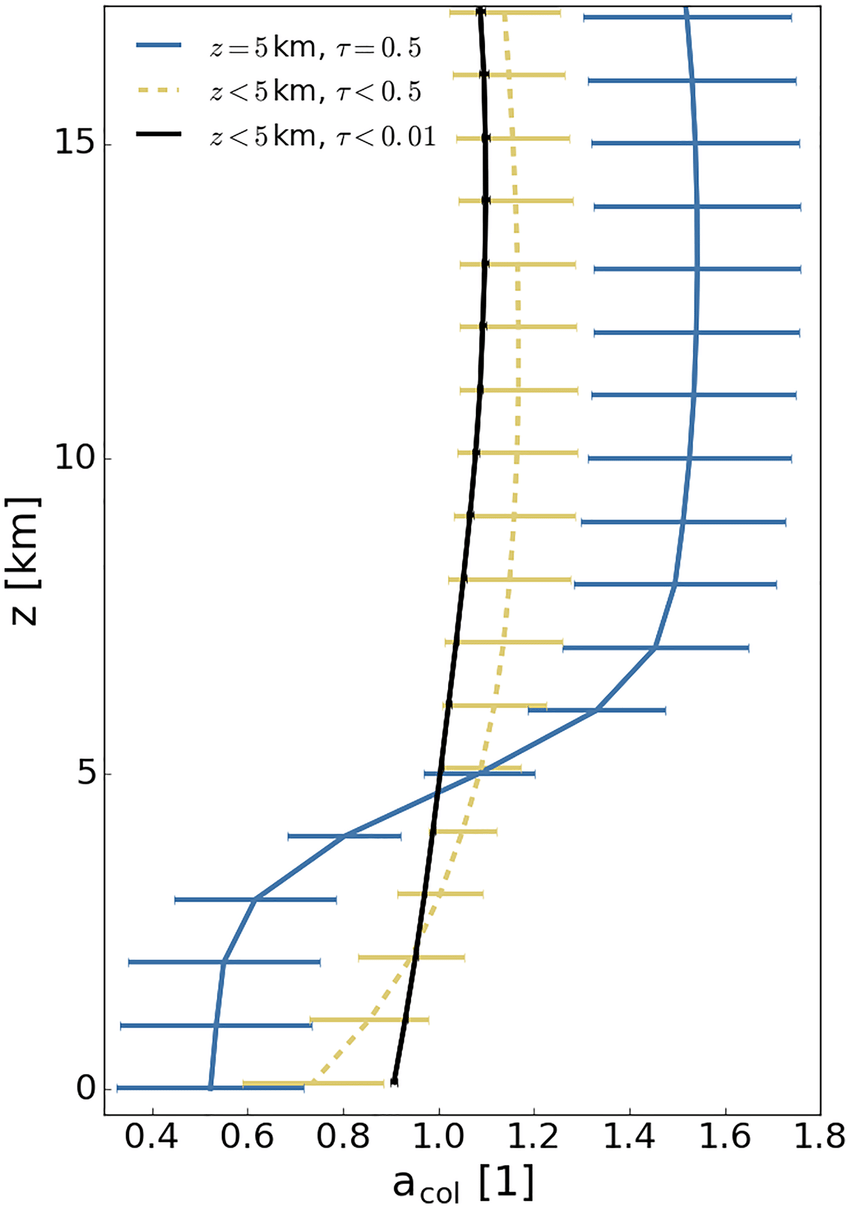 What does this mean? Firstly, the averaging kernel is situation dependent. Maybe that's why you've been told you need the height of the inversion layer, but more likely people may use the height of the inversion layer to model where certain species are likely to be located, using a model that simulates atmospheric chemistry and dynamics. The figure shown here shows global averages for those averaging kernels for a single day (at least that what it claims; more likely it shows the average of all measurements, which is not strictly the same, as the instrument samples some places more than others). Secondly, it's very broad. The black line shows the case for clear-sky. The averaging kernel is rather flat, meaning that CO at various heights contributes pretty much equally to the total column amount. The blue line shows more sensitivity to upper parts of the atmosphere, but that's because the lower part is obscured by clouds.

In this case, there is no vertical height to convert from mole/m² to µg/m³. I suppose you could estimate the mass of a column of atmosphere, but it's more conventional to report in mole/m², such as your source does. Or you could use an atmospheric chemistry model that estimates what a likely vertical distribution looks like, based on various characteristics. I'm not an atmospheric chemist so I can't say a lot about how well that works.

Some averaging kernels look more narrow (NB: not TROPOMI). I think this one is about simulated aerosol retrievals with different channels: 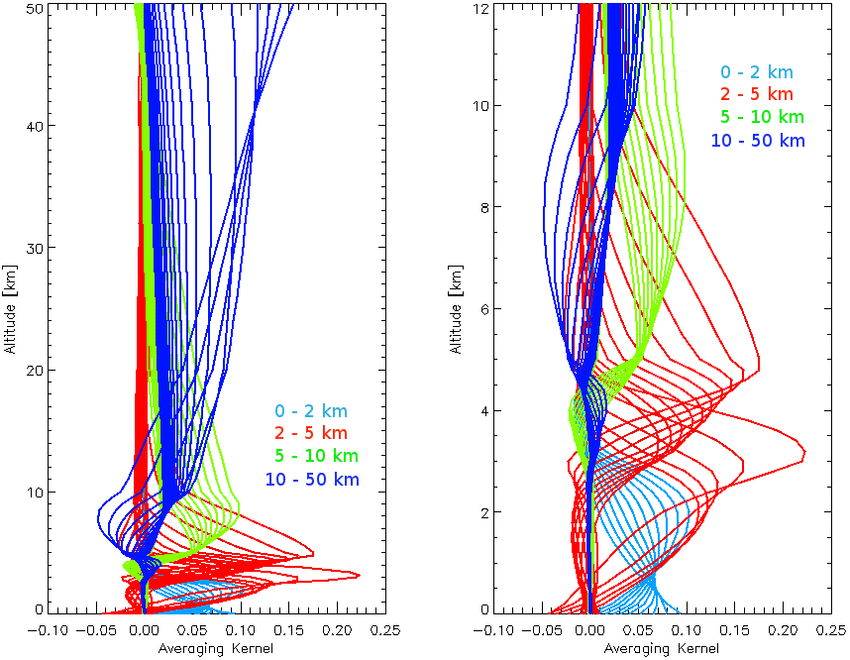 Example of averaging kernel vs. altitude. The simulation refers to a convolved spectrum of spectral resolution ∆ν = 0.01 cm −1 and FWHM = 0.05 cm −1 with a solar zenith angle SZA = 45 • and an instrument viewing angle of 30 • off-nadir. The AK are color coded for different altitude ranges. On the right, a zoom between 0 and 12 km is shown.

In this case, some vertically resolved information is available.

To truly get vertically resolved information, you want to use a limb sounder. Instead of looking down, a limb sounder looks at the horizon, scanning up and down. Each measurement only sees a narrow vertical section of the atmosphere. However, it has a poor horizontal resolution and worse temporal sampling. In the special case of solar occultation, the signal to noise ratio gets very high, but any given location only has measurements about twice a year. Comparing the three is possible. From personal experience, I can tell you that this is a challenge for any scientist :)

Yes, they should. They have different channels that are sensitive to different heights, but this sensitivity is still rather broad. For example, maybe they have a channel that's sensitive to 0-8 km, 2-10 km, 4-14 km, 6-16 km, 8-20 km, 10-30 km, then use a numerical method to estimate the partial column for 0-12 km and 12-30 km. If I see such a claim, I would look closely at the papers describing the retrieval method to see how exactly they calculated what they call tropospheric and stratospheric data. I haven't read those papers in case of TROPOMI, but as a downlooking spectrometer, it's not going to be a sharp cutoff. Maybe the user guide has some information that can help with the vertical attribution?

What you are suggesting is possible in theory but futile for any practical purposes. The concentrations of pollutants varies vertically throughout the atmosphere, so calculating a single value that represents the average concentration in the vertical slab is inherently flawed. Attempting to pick a vertical height that just represents the boundary layer will also not work, since the satellite retrieval is sensitive to the free troposphere, not the surface. You also have the "below cloud" portion of the vertical column to deal with sometimes, which is completely based on model data. If the TROPOMI VCD products could be easily converted to surface concentrations, they would've done it already and provided it as a product.

Can satellites measure "nose-level" concentrations? The short answer is "no" because the majority of satellite instruments that measure pollutants of interest to the AQ community are downward-looking, providing limited information on the vertical structure of the pollutant in the atmosphere. Satellite instruments that measure ozone, NO2, formaldehyde, and SO2 detect the number of molecules between the instrument and the Earth's surface (i.e., a Vertical Column Density or VCD).

You may be able to find SO2 and CO layers with some mixing ratio "profiles", but it's really poor when compared to surface measurements. However, you can integrate sonde measurements to get something comparable to a VCD, if you use the averaging kernels. You can also calculate a modeled VCD (e.g. from CMAQ or other CTM) using the TROPOMI averaging kernels, which is then comparable to the satellite retrieval.

To complicate matters, your surface measurements will vary in time due to local sources (think neighborhood airshed), meteorology, and photochemistry. Your VCD retrievals will be for one timestep per day over a large multi-km area which will vary depending on surface albedo, cloud cover, season, and which pixel on the detector was used, how old the detector is, etc. ... even if the column itself remained the same. Another factor is sensitivity to a clean atmosphere, because if the atmosphere is not heavily polluted, the radiance signal will not be strong and you will basically be looking at noise.

Take a look at these peer reviewed papers, where they compare to surface measurements but do not attempt to convert VCD to surface concentrations:

And if you really want to go down the rabbit hole, you can see this effort to use machine learning to estimate surface NO2 from TropOMI:

Not the answer you're looking for? Browse other questions tagged atmosphere remote-sensing air-quality or ask your own question.

14
How to remove 'silk braid' noise in satellite data?
5
What is principle of inverse modeling?
5
Convert OMI NO2 Vertical Column Density (molecules/cm^2) into Mixing Ratio (ppm)
9
Why are atmospheric BrO and ClO important to measure by satellite?
7
Convert NO2 concentration in Sentinel-5P data from mol/m2 to μg/m3 on the ground level
6
How to convert mol/m^2 to total mass ( e.g gram, kg etc )?