How do tropopause folds form and do they have any impact on synoptic scale weather?

What is the process that creates a tropopause fold? Do these features have any significant impact(s) on weather patterns or the atmosphere? 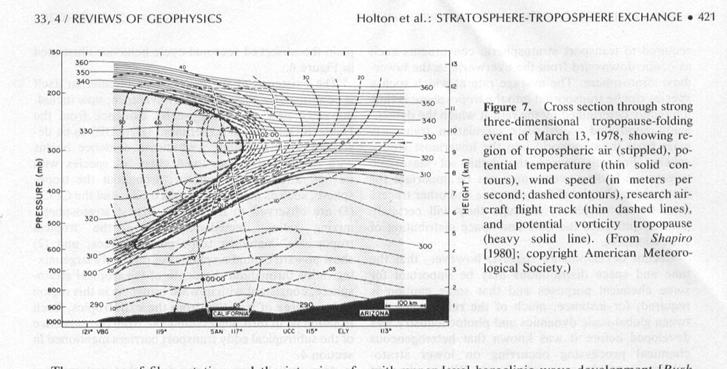 I am not not an expert in meteorology, but do study the chemistry involved in these types of events. My understanding is that the folds in the tropopause generally occur below the front of the jet stream, when the potential vorticity is strong enough to transport stratospheric air down through the tropopause/inversion.

"Mixing between stratospheric and tropospheric air can occur most readily in deep intrusions of stratospheric air into the troposphere, such as tropopause folds (Danielsen 1968). They occur because of the ageostrophic circulation at the jet entrance (Hoskins 1982) and coincide with the frontal zone beneath the jet. Deep folds can extend down to the top of the boundary layer (Browell et al. 1987; Vaughan et al. 1994), while smaller folds, extending only into the upper troposphere, are ubiquitous around the polar jet stream (e.g. Vaughan et al. 2001). They also occur beneath the subtropical jet stream (Gouget et al. 1996), where it has been suggested that mixing between the subtropical fold and tropospheric air promotes the generation of new aerosol particles (Zahn et al. 2000). Turbulence within folds can result from shear instability beneath the jet (Pepler et al. 1998; Hartjenstein 2000) or from convection extending up from the boundary layer (Browning and Reynolds 1994)."

As for synoptic scale weather, I don't think a tropopause fold affects the synoptic scale weather events much, but are rather a part of the weather events. The downward mixing of stratospheric air will introduce drier air, leading to lower humidity in the general vicinity. Of course, ozone will be entrained into the tropopause as well, which has air quality implications. And there are certainly feedbacks in the fold phenomena that will affect heat, radiation, and kinetic patterns... but the synoptic weather in the region is going to be more driven by the jet stream itself rather than a fold that may occur. A meteorologist, though, might have better information on that.

Cross tropopause transport seems to be the main driver : Take a look at this.

Not the answer you're looking for? Browse other questions tagged meteorology troposphere stratosphere synoptic vorticity or ask your own question.

17
Why is the troposphere 8km higher at the equator than the poles?
8
What is the difference between a "flood" and a "flash flood"?
12
How is the Rossby Radius used to determine that synoptic weather systems are 1000-2000km across?
12
Are the "polar vortex" and "cut-off lows" over/near the Great Lakes new phenomena?
4
Desalination and Weather Impact?
2
How can I learn to make mesoscale/synoptic analyses of major weather events?
6
What happens in the upper air when the altitude of the tropopause changes?
3
How do they determine the "feels like" temperatures for weather data?
1
How are climate regions caused by both axial tilt and also by climate circulation cells?