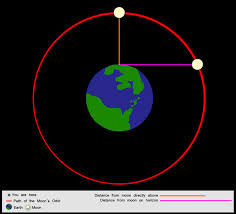 From a viewer's standpoint, when the moon starts to rise at the horizon, is the moon at the furthest distance from the viewer visually? The Moon differs from most satellites of other planets in that its orbit is close to the plane of the ecliptic, and not to Earth's equatorial plane. Remember the moon orbits the earth not the viewer.

As noted by others, the moon follows an elliptical orbit, which will lead to the greatest change in distance regardless of the observation angle.

However, we can place some upper and lower bounds on what the distance at the horizon would be by using the maximum and minimum orbital radii (the apogee and perigee respectively) along with Pythagoras's theorem. 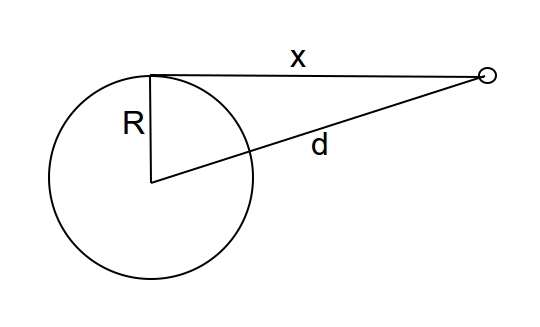 Which we can rearrange to give $x$,

Now just substitue the numbers in. I used the following values from the Orbit of the Moon wiki:

From a viewers standpoint When the moon starts to rise at the horizon, Is the moon at the furthest distance from the viewer visually?

As noted above, viewing angle is not the primary factor in the distance calculation. However, for a given point in its orbit, the Moon is at its furthest visible radius from the Earth at the Horizon. We can see this by comparing to the Moons distance when directly above the observer. This will be the Moon's orbital radius minus the radius of the Earth. For each orbital point this is:

Each of which is around 6300 km closer than when the same orbital configuration is viewed at the Horizon. The Moon may appear larger at the horizon, and hence closer, but this is an illusion.

The Moon differs from most satellites of other planets in that its orbit is close to the plane of the ecliptic, and not to Earth's equatorial plane

For the horizon distance, the position of the observer on the Earth makes no difference: when the Moon is at the Horizon the distance, for a given orbital configuration, will be the same (minus altitude differences on the Earth's surface). However, from some observational positions the Moon will never be directly above, so the second part is location dependent.

I want one source from each of the following governments sites- ( U.K gov)(Russian gov)and (Chinese gov) and the sources HAVE to all state a ''similar'' distance.

I doubt that this data is available publicly on government websites. If it was, you could probably find it yourself.

The Moon's orbit is elliptical, not circular, and the maximum and minimum distance from the Moon to the center of the Earth (apogee and perigee, 405,385 and 363,630 km respectively) are much larger than the radius of the Earth (6370 km). Therefore, the distance you are asking for is very variable and it does not depend so much on the position of the Moon relative to the observer's horizon, but mainly on the position of the Moon along its own orbit.

Not the answer you're looking for? Browse other questions tagged moon orbit horizon or ask your own question.

4
What is the furthest observable phenomenon from Earth that is Earth Science?
5
Why does helium-3 stay in the moon and not escape from it?
2
Old moon in the new moon's arm
8
What are we seeing when we see the curvature of Earth?
3
Moon tilt against the horizon in a single day
82
What place on Earth is closest to the Sun?
3
What Earth Science research will be done from the International Space Station?