Where does all the salt come from in the Dead Sea?

Usually when I think of a lake it should be sweet water as all the water is coming from rivers/mountains and rain and, because it is very low situated, all ground water should also flow into it. But the Dead Sea is very salty (32%). So how did all that salt came into that lake?

Also, why is it called a sea and not a lake?

The composition of the Dead Sea is quite unlike most other salt lakes, and is not at all like sea-water. Compare the concentrations, in grams per litre: 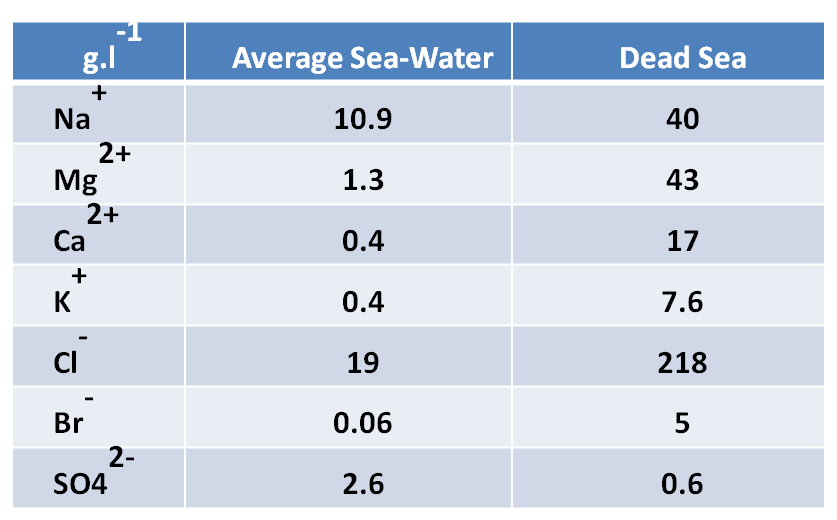 The potassium, bromine and magnesium are all hugely enriched relative to seawater, so clearly, it is not just a case of evaporation of residual seawater from the time of isolation of the Dead Sea. In fact, the vast majority of the water, and almost all of the magnesium, is derived from rivers draining from the north, from around the sea of Galilee, where magnesium-rich volcanic rocks weather rapidly. Much of the sodium and chlorine is derived from evaporation of rainfall originating from the Mediterranean - rainfall being just massively diluted sea water to start with. The high calcium and potassium comes from evaporite dissolution from the surrounding and adjacent rocks, especially from the Lissan Marl and saline springs emanating therefrom.

The real problem is: Where did all that bromine come from? The Dead Sea has the highest concentration of bromine in the world, and it is far from obvious how it got there. Clearly, there has been a massive concentration process. Maybe it was concentrated in the saline base of a much larger lake during the time of formation of the crustal formation of the Aqaba - Dead Sea - Gollan Heights rift? Any 'armchair theorists' out there with a better hypothesis?

The difference between a lake and sea can simply be size and what humans desire to call it.

You can think of the Dead Sea as a giant lake if you wish.

The salt in the seas comes from rain running on top of rocks, such as mountains, and carrying the minerals, which contain salt, with them into the sea.

In rivers, the water runs continuously and the minerals are carried away into the open ocean (which is why the sea is salty).

In closed lakes, like the Dead Sea, the water can not escape into the ocean and the minerals/salt build up.

I'll add a bit about the name:

In Biblical Hebrew (and to a large degree in modern Hebrew), the word for sea is "yam" (ים), which doesn't have the modern meaning of a roughly defined area that is part of the larger ocean system. Instead, it basically means "a large body of water". There four "seas" in this region. "Yam Hamelah/Hamavet" ("sea of the salt/dead" ים המלח/מוות), "Yam Kinneret" (sea of galilee ים כינרת), "Yam Soof/Hayam Ha'adom" (sea of reed/the Red Sea ים סוף/הים האגום) and just "Yama" ("to the sea" ימה), literally means "west", referring to the Mediterranean Sea.

The word for lake, "agam" (אגם), was used only for small seasonal ponds.

The biblical usage for the "seas" remained in modern Hebrew, but whenever we refer to any other inland bodies of water elsewhere in the world, we actually use "agam" and not "yam".

So in summary, it's called a sea because of historical and linguistic reasons, not because of any geographical or morphological features.

Not the answer you're looking for? Browse other questions tagged water salinity or ask your own question.

10
Where does the lithium in Salar de Uyuni comes from?
13
Where does the water from rain in rain forests come from?
11
What is the temperature of the flowing water in icy river?
1
Is there a lake whose sole source of water is rain and has a hole at the bottom draining it?
5
When sea water evaporates does it carry small amounts of salt into the atmosphere?
8
Aren't fresh water deposits renewed by the water cycle?
13
How is it possible to use up the water in a region?
31
Why does the salt in the oceans not sink to the bottom?