How do they know the 2016 Kaikoura (NZ) Earthquake was 'complex', involved six different faults?

The powerful earthquakes which hit New Zealand were some of the most complex ever recorded, say scientists.

Most earthquakes are the result of rupture on a single fault plane. But the twin quakes led to the rupture of at least six faults, including a newly identified one at Waipapa Bay.

The article describes several resulting changes after the 7.8 magnitude 2016 Kaikoura earthquake, including seabeds raised above the surface, a dangerous 150m-high landslide dam has formed on the Hapuku River, and a town completely cut-off by landslides:

Kaikoura itself was completely cut off by landslides. About 1,000 tourists and locals have been evacuated by sea from the small town...

The image below is one of several from the article.

It's hard for me to understand what happened. It seems there were actually two distinct major earthquakes in rapid succession, and a lot of other motion and changes in nearby related faults. Was seismic data alone used to reach this conclusion, or is it a complex analysis of seismic, satellite, and ground-truth data used to "reconstruct" what actually happened? Is there some more technical description of the analysis available? 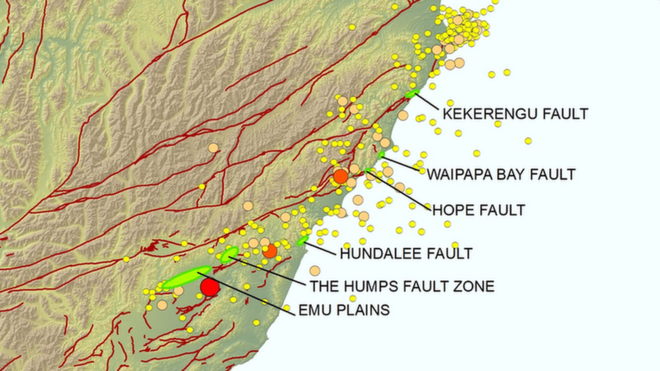 You need to see the InSAR data. E.g., see this image which is based on radar data acquired by ESA's Sentinel-1A satellite. For straight faults the pattern is not this complicated.

Using such observations we can estimate which parts of the fault slipped. E.g., take a look at these images. This is done by solving an "inverse problem", i.e., you have some observations and you're trying to estimate what parameters in a (physics-based) model can reproduce the observations. In essence, it is an optimization problem like curve fitting.

Note: Besides InSAR data, we can also use data from seismometers but the former makes it rather obvious.

Not the answer you're looking for? Browse other questions tagged seismology earthquakes or ask your own question.

4
Can two earthquakes happen at the same time?

20
How do seismologists locate the epicenter and focus of an earthquake?
15
How to compute the earthquake occurrence probability under ETAS model
8
Evidence of a seismic trigger of the Storegga Slide ~8.2ka
3
How to find the magnitude of earthquakes roughly if we know the Richter scale magnitude of epicenter?
1
Is there a general equation to know how big of an area is affected by an earthquake?
1
How do we know the speed of S-waves (shear waves) in the Earth's inner core? Has this been measured?
4
How much time is there between an underwater earthquake and the moment a tsunami hits the coast?