Would more or less land be usable if global temperatures rose?

I think a large portion of the earth's land is unusable from being too cold and land that is too hot does not have enough water and dries out which could be fixed by diverging water to those areas.

Then there is the sea levels rising so some land will be underwater but that will be an insignificant amount compared to the amount of new usable land, not to mention we could reshape land in those areas to prevent it from being underwater.

Yes. current climate change will most likely increase the amount of cultivable lands on Earth. However, it will at a high social cost and at the expense of biodiversity, and I can't emphasize enough the paramount importance of biodiversity for the heath of ecosystems and human food safety.

Consider also that similarly to mining, where the value of a deposit is related not only to the total amount of mineral but also to its concentration, we have to consider also how intensive is the food production allowed by a piece of land. In this regard, climate change can lead to the loss of highly productive areas, compensated only by the gain of large expanses of nutrient poor soils in the tundra.

You should also consider the social impacts of the degradation of current cultivation lands and the economic costs of moving food production pole-wards.

To answer this question with some degree of certainty is extraordinarily complex, because we don't know how exactly climate will change, but several studies have addressed this problem. A good example is The global distribution of cultivable lands: current patterns and sensitivity to possible climate change. There they point that:

We estimate that climate change, as simulated by global climate models, will expand cropland suitability by an additional 16%, mainly in the Northern Hemisphere high latitudes. However, the tropics (mainly Africa, northern South America, Mexico and Central America and Oceania) will experience a small decrease in suitability due to climate change. 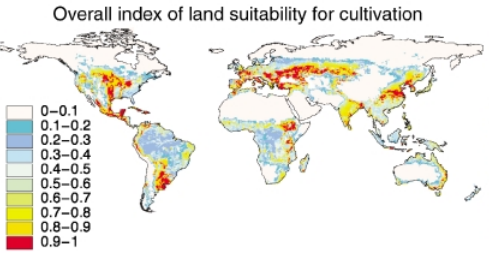 You can see how the north of America and Eurasia show large expanses (although quite exaggerated by the map projection) of land not suitable for cultivation due to the cold temperatures. This data can be downloaded here, and I've used it to plot the following figure that shows the mean cultivation suitability index as a function of latitude. It is also plotted the land area as a function of latitude as derived from ETOPO: 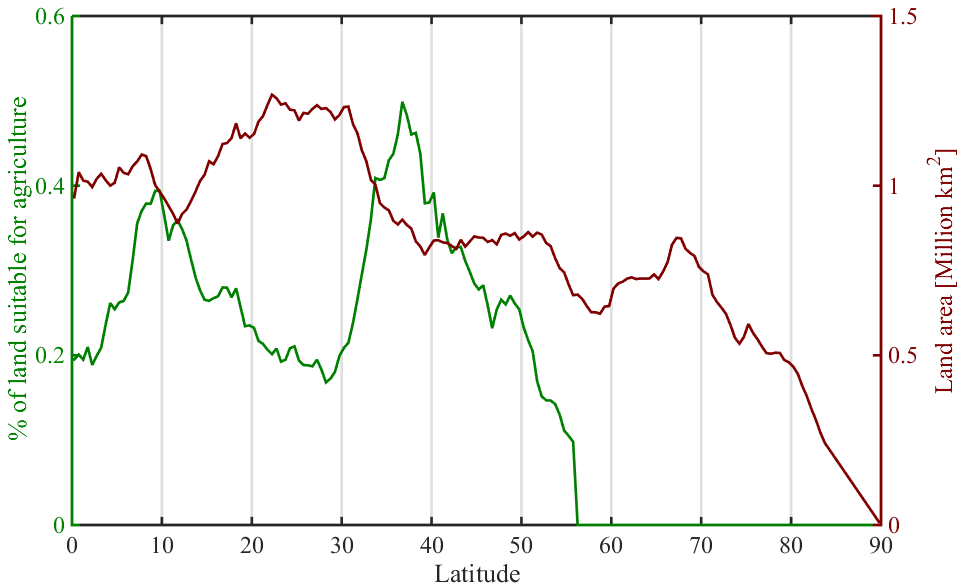 As you can see, pole-wards of 56° there is a significant amount of land of which none is suitable for cultivation. However, it is clear that temperature is not the whole picture, and aridity around 25° of latitude can significantly drop cultivation suitability.

I found interesting to see that the left (equator-wards) side of the main peak in cultivation suitability currently at 37° lies at a latitude with a lot of land, so if that end is lost to aridity, the gain of land on its (right) pole-wards end will be smaller due to the downwards trends of land area towards the pole. Nevertheless, as I mentioned, models suggest climate change will increase the overall land surface suitable for agriculture.

Another study: Northward shift of the agricultural climate zone under 21st-century global climate change. Focus on temperature and shows in Fig. 1 how the line that divides temperature regime suitable from cultivation of cereals will migrate northwards under the projected climate change:

However, they highlight the challenges for cultivation in high latitudes, which present a much more dramatic seasonal contrast that traditional crop lands:

By 2099, roughly 76% of the boreal region might reach crop feasible conditions, compared to the current 32%. The leading edge of the feasible conditions will shift northwards. However, most of the newly gained areas are associated with highly seasonal and monthly variations in climatic water balances, a critical component of any future land-use and management decisions.

[the cite above was edited for simplification and context]

Not the answer you're looking for? Browse other questions tagged climate-change climate geography gis or ask your own question.

9
Will global warming lead to agriculture in the Arctic?