Why is the Coriolis effect zero near the equator?

I came to know that Coriolis effect is maximum at the poles and negligible at the equator. I could not figure a logical meaning behind it. Could someone please explain? Also, does it have anything to do with the trade winds and the ITCZ?

However, there is a non-zero vertical component to the Coriolis effect. If you drop a ball from the top of a tall vertical tower at the equator the ball will land to the a bit to the east of the base of the tower due to the Coriolis effect. On the other hand, if you shoot a ball straight up at the equator, the ball will land a bit to the west of where you shot it from.

You tagged this question meteorology. Winds are mostly horizontal. The horizontal component of the Coriolis effect due to a horizontal wind at the equator is zero.

David's answer is comprehensive, but perhaps a little technical for the level of the question, so I'll try to offer another angle.

Coriolis is an apparent force that causes an air parcel to curve to the right in the northern hemisphere and to the left in the SH and can be understood by a conservation of angular momentum. With regards to how Earth's rotation affects the apparent horizontal movement of wind, these figure gives a nice summary:

We can see that closer to the poles, an aircraft will appear to have more Earth "move" beneath them while in the air. Another way to visualize the effects of Earth's rotation is imagining a person standing at the equator and at the pole. Equator-person will feel no rotation along their vertical axis with respect to the planet, while pole-person will continuously spin in place with respect to the planet's axis. 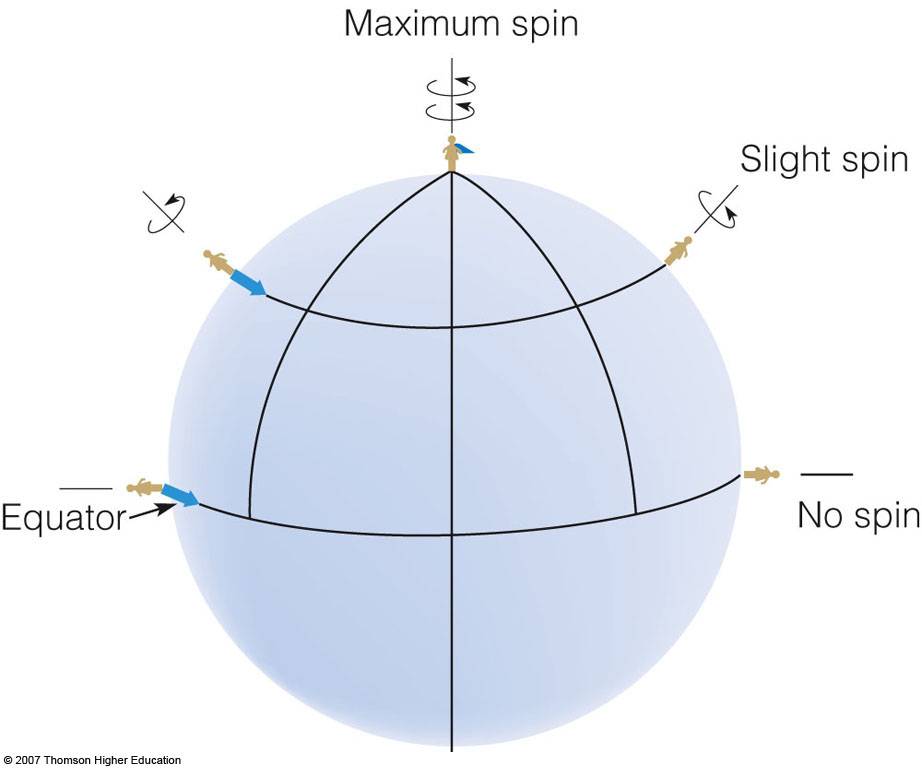 Because air parcels are in constant motion over a rotating surface, the amount of apparent horizontal deflection is determined by the latitude of the air.

A simplified version of north/south Coriolis force operating on horizontal winds is given by:

Where omega (Ω) is the rate of earth's rotation, or angular velocity, (7.292 x 10-5 sec-1), and phi (ϕ) is the latitude of the wind velocity component (V) in question. Because Earth spins counter-clockwise, the apparent deflection of wind is 90° to the right in the northern hemisphere and 90° to the left in the SH.

From the equation we can see that if the latitude is zero, then the horizontal north-south deflection contribution of Coriolis is zero. It's important to note that Coriolis has more components than north-south contributions, like in the vertical and east-west, but for the purposes of wrapping your head around the basics this should suffice.

There are also symmetry arguments showing that the Coriolis effect at the equator is zero. At the equator, there is nothing distinguishing North from South, so the effect of moving in either direction should be the same, so it must be zero. When you get away from the equator, one direction is moving towards the closest pole, and the other is moving away, and that breaks the symmetry. There's also the argument that since the effect is opposite in the two hemispheres, it must go to zero somewhere, and the most obvious place for that is the equator.

18
Why does the Hadley cell descend at 30 degrees?
17
Why does the Inter tropical Convergence Zone shift?
15
Why One Side of Mountain Range is Lush
4
Need help understanding variables that relate to meterology terminology
11
Why is the South Pole colder than the North Pole?
7
Does the Coriolis Effect affect a wind from East to West?
3
Why is the pressure on the poles higher in Summer and lower in Winter?
3
How does the changing seasons affect the large scale easterly flow of the ITCZ?
4
Is it possible to detect Coriolis effect using a Wind Rose?