Is a San Andreas volcano possible?

This question is, in part, inspired from the 1997 Hollywood movie Volcano, where a fictional volcano erupted out of the La Brea Tar Pits in Los Angeles.

The San Andreas Fault is a transform fault plate boundary (see image below):

Image from the USGS Glossary entry for transform faults, with a definition:

A transform fault is a special variety of strike-slip fault that accommodates relative horizontal slip between other tectonic elements, such as oceanic crustal plates.

A specific type of transform fault is a 'leaky transform fault', which according to a source used on its Wikipedia page describes the tectonic movement at this type of faulting as being:

In addition to the regular strike-slip motion observed at transform boundaries, an oblique extensional component is present, resulting in motion of the plates that is not parallel to the plate boundary. 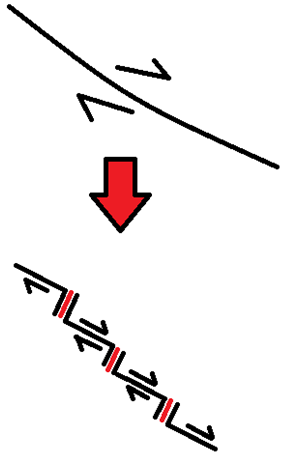 Is there any evidence that oblique tectonic movement occurs along the San Andreas Fault?

Yes. In fact there are already volcanos associated with the San Andreas fault system.

Neenach is an extinct Miocene volcano split in half by the San Andreas fault. Garry Hayes wrote a nice blog post about this volcano system: A Volcano Sundered: A Field Trip Along the San Andreas Fault.

If you'll allow some latitude in what counts as 'a San Andreas volcano', then there is active volcanism too. The Salton Buttes are a group of rhyolitic volcanos in the Brawley Seismic Zone, a set of oblique transform faults — actually in the axis of the active Gulf of California rift — on the south-east shore of the Salton Sea. You can see them in this Google Maps image (on the right; the big fields are 800 m across):

The Space Shuttle photo (left) of the Imperial Valley annotated by the USGS shows the relationship between the San Andreas fault, about 5 km from the volcanos, the Brawley Seismic Zone (BSZ), and the Imperial Fault to the south. At this scale, it's essentially one big fault system.

11
Olympus Mons sized volcano on Earth?
20
Why does Volcano Lightning occur?
18
Is the magma in one volcano different from the magma in every other volcano?
5
What drove the Puy de Dôme volcano?
5
Is San Andreas fault horizontal or vertical?
2
Volcano in ocean?
1
Are there lava flows inside a volcano?
1
Is it possible for an active volcano to become less violent over time?