What mechanism leads to these spectacular iridescent patterns in clouds labeled as a "Fire Rainbow"?

The 21-Feb-2016 BBC new article Singapore 'fire rainbow' cloud phenomenon lights up sky shows several photos of a rainbow-like iridescence in clouds on a sunny day in Singapore (about 1.3 degrees North latitude). Local time was about 17:10, 2 hours before sunset.

I've read about circumhorizontal arcs in this article, but the photos there (and other places) show a definite orientation - approximately parallel to the horizon with red on top (higher elevation angle).

However the photos from Singapore show tight circular patterns that resemble a color-coded contour map around a hill. So I think the explanation for these would not be identical to the explanation for a classic circumhorizontal arc or "Fire Rainbow". 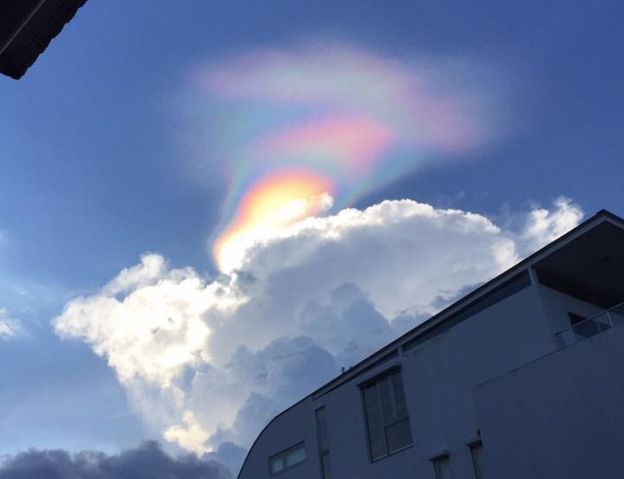 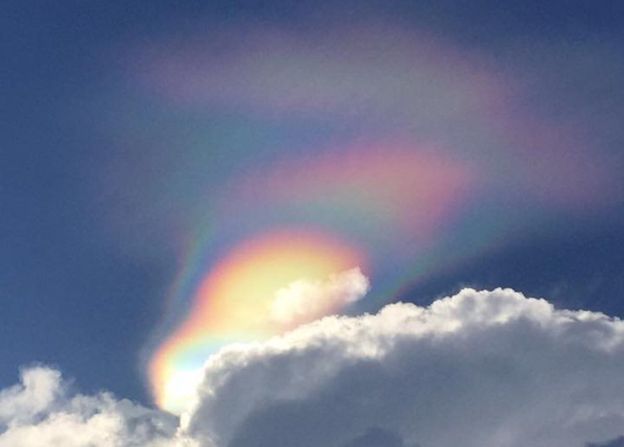 below: example of a circumhorizontal arc from Fire Rainbows: A Rare Cloud Phenomenon. 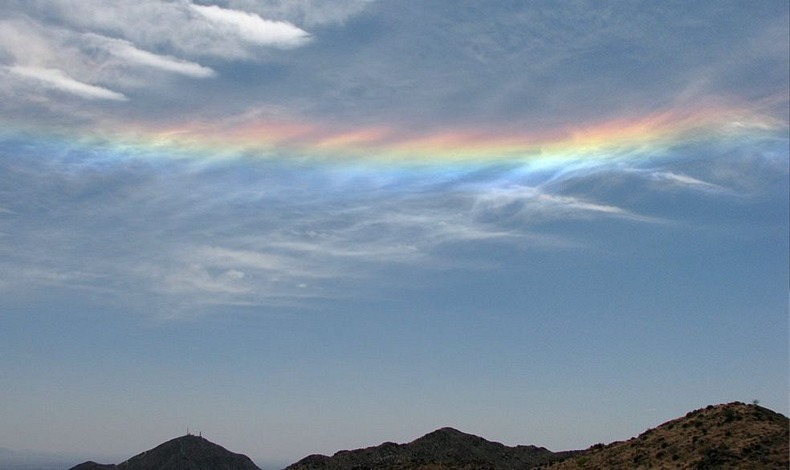 The top two pictures are of iridescence in a pileus (AKA "cap cloud") above a growing thunderstorm. Pileus clouds form when a storm updraft pushes up through a layer of moist air, and lifts that layer uniformly, causing it to condense into a thin layer of cloud. Since all the cloud droplets are formed at about the same time as this moist layer is lifted, they all end up roughly the same size, which is perfect conditions for iridescence to form.

The term "fire rainbow" doesn't have a consistent definition, because it is a term invented by a journalist for phenomena that was already known and named: specifically the circumhorizon arc. This journalist apparently didn't bother to consult scientists (or even amateur skywatchers) to find out if it already had a name, and so gave it this artistic name: I'm guessing the "fire" in fire rainbow is supposed to describe the "flame" shape of the wisps of cirrus in that original display. And because journalists and others who don't know any better think all things that vaguely look the same are the same, the term is now applied to pretty much any colorful sky phenomenon, hence the embarrassing BBC article reporting on what other journalists are calling it rather than ringing up their local meteorologist. They must have at least one in-house, no?

An other alternative is irradecent clouds,They have many of the same properties as mother of pearl clouds https://en.wikipedia.org/wiki/Cloud_iridescence

The last alternative is a pollen rainbow but they do often form in the direction of the sun or moon(it is a little hard to see if the sun is behind the clouds in your pictures)The colors of a pollen rainbow is often more vibrant than other types of optical phnomena https://soranews24.com/2019/03/09/high-pollen-levels-in-eastern-japan-create-pretty-rainbow-suns/

13
What is an "exquisitely rare pollen corona"? How can pollen produce several tight rainbow circles around the Sun, and why pollen specifically?

15
What type of cloud formation are these dark low-hanging clouds?
15
What causes these banded clouds?
9
What type of clouds are these?
5
What actually happens to reduce the perceived color in a 'white rainbow" or "fog-bow"?
8
Are these clouds exhibiting gravity waves?
5
What might cause these "wave clouds" near the horizon? Could it be gravity waves?
6
Is there a name for these "pouring" clouds?
4
Why are these patterns of scattered sunlight aligned to the local horizontal and vertical directions?
3
What might be causing this rainbow-like effect on the ground?
6
Help understanding this image of an unusual double reflected rainbow