Seeming correlation between time of day and earthquakes

I live in a generally geographically active area (Southern California, near the San Andreas fault, if that matters), that has had two relatively minor earthquakes that I have felt in the last week (in the 3-4 range on the Richter Scale, I believe), as well as frequently in the past. I am used to this, being born and raised in the region.

I was talking about these phenomena with a colleague who recently moved to the area from a non-earthquake prone place, and was not used to them. I realized that both of the earthquakes were late at night, when I was in bed, and searching my memory I can only recall encountering these minor earthquakes at similar times.

My question, therefore, is if there is any correlation between time of day and earthquakes? Or to put it another way, is my observation based on anything more than the fact that I am more likely to note and recall a minor earthquake what I am not engaged in another activity?

As noted by Barry Carter, you could take a look at https://www.emsc-csem.org/Earthquake/Map/zoom.php?key=75&typ=NAM#5 to see the earthquakes around San Francisco, with a table below giving the time and date of the earthquake(s). The USGS can create a similar data-set (try there). I used that to extract the earthquakes of magnitude 2.5+ in the SF area over the last 4 years: 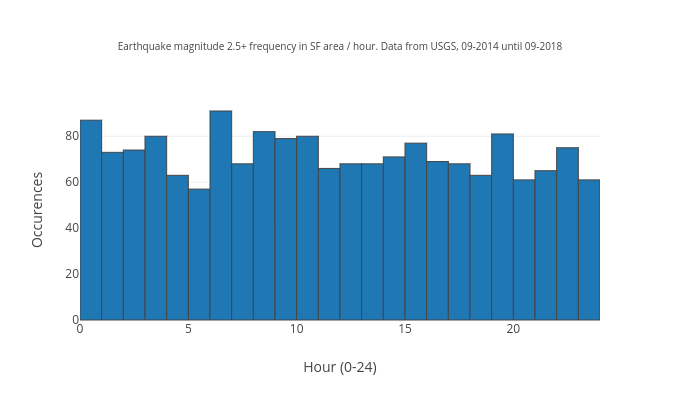 Or the same data with a Kernel Density Estimator in a polar plot (the circle corresponds to 24 hours): 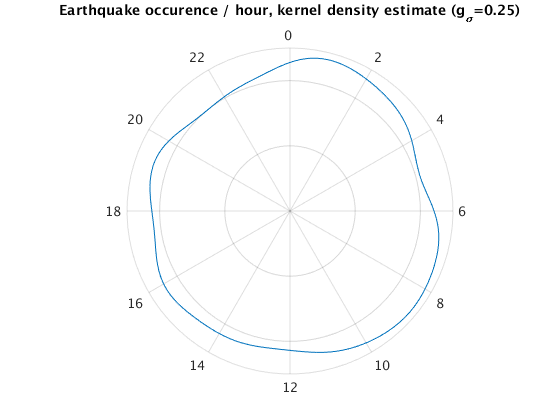 Based on these plots, I think that there is no specific trend suggesting that earthquakes are triggered at specific times.

Earthquakes tend to have their 'core' at depths of a few km's usually, which means that they are not very aware of day-night cycles. Apart from perhaps very minor influence of gravitational differences due to sun/moon locations (which vary over the course of a month), the earthquakes truly follow their own 'random schedule' with respect to our life-cycle!

Not the answer you're looking for? Browse other questions tagged geology geophysics earthquakes earth-observation time or ask your own question.

5
Are there any seasonal or diurnal trends in earthquakes?

15
What does it mean when the depth of earthquakes get near the surface over a period of time?
16
Potential explanations of Red Sea crossing
13
Is there a correlation between hot springs and earthquakes?
4
Relationship between tides and earthquakes
4
Can two earthquakes happen at the same time?
0
Earthquakes PGA/PGV in time?
4
What is the largest earthquake attributable solely to volcanic activity