What causes this arc in the night sky where the background is brighter on one side than the other?

It's a fisheye lens view (FOV wider than 180 degrees)looking straight up.

There is an large arc that begins at the bottom of the image (where the elevations of 20 and 30 degrees are deonted) and extends upward and toward the left. It looks like it could be a circle about the anti-lunar point since the moon is also seen on the right side slightly above center.

Question: What is happening here? Is this an atmospheric effect of scattered moonlight? If so, what causes such a sharp transition in the amount of scattered light? Does this have a name? 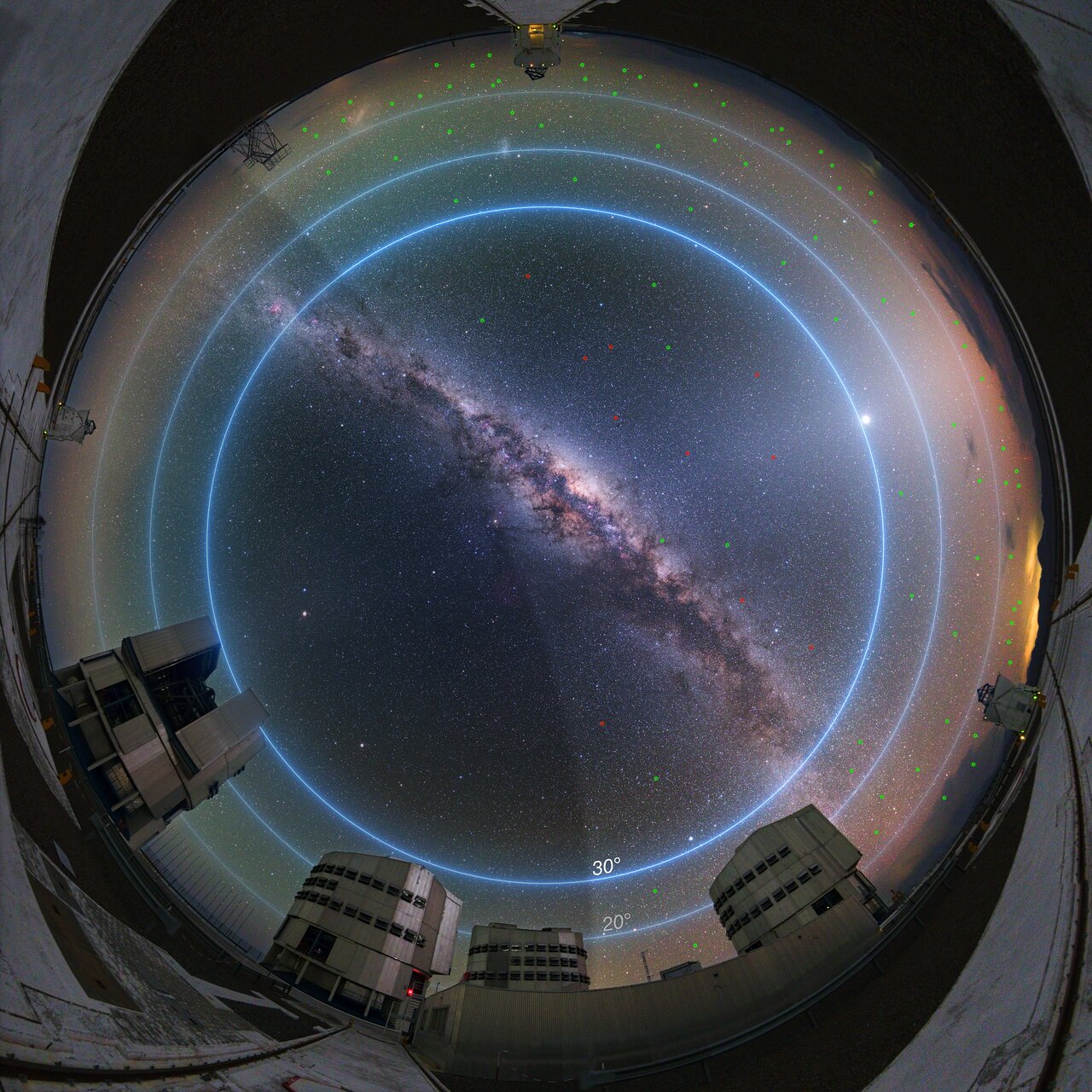 This annotated image shows the night sky at ESO's Paranal Observatory around twilight, about 90 minutes before sunrise. The blue lines mark degrees of elevation above the horizon.

A new ESO study looking into the impact of satellite constellations on astronomical observations shows that up to about 100 satellites could be bright enough to be visible with the naked eye during twilight hours (magnitude 5–6 or brighter). The vast majority of these, their locations marked with small green circles in the image, would be low in the sky, below about 30 degrees elevation, and/or would be rather faint. Only a few satellites, their locations marked in red, would be above 30 degrees of the horizon — the part of the sky where most astronomical observations take place — and be relatively bright (magnitude of about 3–4). For comparison, Polaris, the North Star, has a magnitude of 2, which is 2.5 times brighter than an object of magnitude 3.

The number of visible satellites plummets towards the middle of the night when more satellites fall into the shadow of the Earth, represented by the dark area on the left of the image. Satellites within the Earth's shadow are invisible.

What is happening here? Photoshop!

The number of visible satellites plummets towards the middle of the night when more satellites fall into the shadow of the Earth, represented by the dark area on the left of the image. (emphasis added)

Not the answer you're looking for? Browse other questions tagged atmosphere astronomy identification-request atmospheric-optics or ask your own question.

4
Have these optical satellite ground station locations been chosen for clear skies?
0
Other than the South Pole where is the windless place on Earth?
6
What mechanism leads to these spectacular iridescent patterns in clouds labeled as a "Fire Rainbow"?
6
Where is the Arctic Circle for civil and astronomical twilight?
3
Are there measurements or calculations that suggest atmospheric ice plates would be horizontal to within 0.1 degrees?
2
Atmospheric conditions needed that blocks all bright light during sunsets and allows you to stare directly at the sun