How are climate regions caused by both axial tilt and also by climate circulation cells?

So Earth has an axial tilt and that creates weather regions. For example, approximately 23 degrees north and south, approximately the same as the planet's axial tilt, will give you the tropics. This creates a band around the Earth of warm wet climate. But then there are these climate cells as well. The Hadley cell occurs at 30 degrees north and south. This apparently creates low pressure and high pressure zones of hot air rising, condensing with rain, falling and cooling, etc.

The tilt is not the real reason for the perpetually warm, humid weather in the tropics.

See Uranus, which is tilted about 98 degrees, and so the entire planet has a season of full sunlight and a season of full shade. Being so far from the sun, perhaps the impacts aren't huge... but you can imagine if that were Earth, everywhere would face long hot periods and long cold periods, and the "tropics" as the region between the two lines wouldn't feel very "tropical" overall.

Likewise a planet with no tilt would basically have the same incoming solar radiation throughout, with perpetual climate then only kindled by the curving of the Earth.

Why do we define tropics that way then?

Well the axial tilt of Earth was discovered long before a conceptual understanding of weather was determined. The word tropic was originally about the tilt and not the weather/region.

Meteorology as a science really didn't really advance a ton until the late 1800s, when the telegraph finally started allowing more reasonable collection of measurements over large regions. Hadley was actually well ahead of his time, proposing the loose explanation in the mid 1700s, but the rough concept didn't reach popularity until the 1800s. Regardless, the word tropic was in use long before Hadley's theory.

By the 1600s exploration had a fairly through picture of basically all the Earth outside the polar regions. And the lines for the Tropics of Cancer\Capricorn were already on that Mercator's map.

Exploration and colonization also not only made astronomy and navigation of wider interest to the European scientific realm, but those colonies and imports also sparked particular societal interest towards many warm, moist regions (West Indies, East Indies, Africa, Central\South America). And so tropics rapidly came to be refer to the general region between the two lines, apparently by 1520. And its use as imagery quickly associated it with that region's weather.
(Such imagery is common, just as Arctic quickly became associated with cold weather).

So we had climate regions long before we had explanations for why they existed.

They're called the tropics, which is indeed a term from axial tilt. But that isn't because the tilt causes the tropics weather.

See this English StackExchange question on the word's history for a bit more detail on the etymology.

So what explains tropical weather?

Being heated fairly consistently at significant amounts in low latitudes certainly explains the warm temperatures we think of as tropical. So in a sense the lack of large tilt does connect to that. Though that heating difference is really due directly to the curvature of the Earth, so not in any real kind of 23.5°ish kind of way.

Rainy weather in the tropics doesn't really need the Hadley Circulation either; it is likewise driven by all the warm, less dense air. Edmond Halley had proposed this idea in the 1600s. Warm air at equators = rising, stormy. Cold air at the poles = sinking, desert-like. Only need that basic idea, don't need the more complex cells of Hadley. But this also doesn't explain the extent of the tropics to much detail.

What does need the extra Hadley cell to explain is the wind direction in the "tropics", and why they are limited so much, such that there's sinking air at 30°. The Hadley shows that conservation of angular momentum means air can't go directly from the tropics to the poles aloft without stopping, and so the sinking results in 4 latitudes per hemisphere of alternated weather... while Halley could only explain 2 of these temperature zones in each hemisphere.

Do note that there are 4 zones of weather in a hemisphere due to Hadley, not 3, which in a sense throws a kink in your question...
The dry region is setup to be at roughly 30° North\South from Hadley. But being CENTERED on that latitude, it means real "tropical" weather (including persistent copious rainfall) wouldn't be 0-30, but much less. If each of the seven resulting latitudinal zones is a similar 30° in size, the tropics would be more like 15°S to 15°N. [There's no absolute requirement for equal sized zones; slow sinking air is often spread over a much larger area than rapid rising air... such as the comparison of the area of deep updrafts in a hurricane to the subsidence surrounding the storm. In addition disproportionate surface areas and the impact of temperatures on density further complicate blip the balance... but it's still seems reasonable as a whole] With the seasonal shift of weather (just as the zone of arctic fronts and cold air shifts with season, so does the ITCZ) (the movement of which IS caused by the tilt), it means if you envision tropical as being yearround rain... there's not a great size to it. Just how tropical places are (in terms of wetness) comes down a great deal to local geography... certainly the cells don't jump out too cleanly on an average rainfall map... 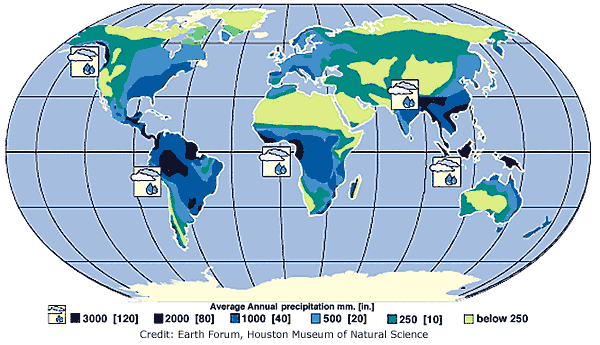 So tropical weather isn't set as 23.5°N to 23.5°S via the tilt. Tilt controls the seasonal shift of weather, but not really the size of climate zones or their types.

And tropical weather also isn't set as 30°N to 30°S via the Hadley cell/angular momentum. The Hadley does setup the types and sizes of the climate zones, but that means they're smaller.

Generally the true "deep tropics" are less than both. (After all the Sahara is basically centered near to the Tropic of Cancer). If each climate zone is considered roughly equal in latitudinal size, the tropics boundaries due to the Hadley Cell would only be more like 15°N to 15°S. And the shifts caused by the tilt then make it yet more complex in defining, depending upon how much rainfall variability you're willing to accept.

Generally speaking, the tropics are a geographical term. It's the area on the surface of the planet where at least once a year the Sun passes directly overhead.

Now, coming to Hadley cells and how they relate to tropics - they are not directly related to one another, i.e. one of them is not used to define the other.

In Hadley cell the humid air rises and moves north or south depending whether it started north or south of the equator and then sinks to the surface at around 30 degrees north and south of equator. So they are both dependent on the same factors, namely the simple fact that it's generally hot in the tropical region.

Not the answer you're looking for? Browse other questions tagged meteorology climate climate-models or ask your own question.

33
What factors determine the number of Hadley cells for a planet?
17
Why does the Inter tropical Convergence Zone shift?
18
Why does the Hadley cell descend at 30 degrees?
1
If the earth is a globe, what causes temperature differences across lines of latitude?

8
How does the amount of mass in an atmosphere affect the seasonal changes and dynamics of the planet's climate?
33
What factors determine the number of Hadley cells for a planet?
28
What sort of climate zones would be present if Earth was tilted like Uranus?
13
Climate on an Earth without an Axial Tilt
3
Is this a contradiction in Wikipedia's definition of temperate zone?