What efforts have been made to separate the microseismic events related to wind-related ocean waves from the components of volcanic origin?

I have read the question What generates the microseism? and it's accompanying answer.

In [#1, cited below], they use the azimuth values of seismographic activity on the flanks of the volcano Stromboli to discern where this microseismic "noise" is coming from:

The behaviour of polarisation at the east flank lets us suppose that the microseismic noise comes from this direction. This is the direction of the Scirocco wind (south, southeast direction) that blows on Stromboli during summer season.

So, according the other answer on the site, these low frequency oscillations are due to the wind's effect on the waves of the ocean. In the initial question that sparked the answer, it was cited the frequency of these ocean waves was 0.2 Hz, which is in the 0.1-0.5 Hz region that the Stromboli researchers were looking at.

The whole crux of the Stromboli paper was that the microseismic events (volcanic and non-volcanic) were enough to confound the separation of the tremor signals into independent components These researchers were using independent component analysis (ICA) and were able to pull a 0.2 Hz and a 0.4 Hz component out of the mixture (likely corresponding to the 0.2 Hz ocean wave energy mentioned in the other question). 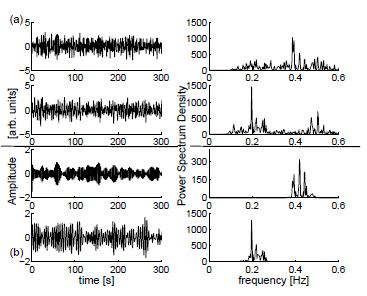 Stromboli has a constant tremor due to its ongoing activity, but have there been efforts elsewhere to suss out which of the microseismic activities are from sources in the ocean versus those coming from intermittent volcanic tremors? Could this be achieved by using a combination of sensors, some in the ocean and some on land, or is this type of analysis not really useful?

There have been several studies regarding the separation of volcanic and water-wave (surf) microseismic traces, recently a study was performed exactly as you asked - using and comparing data from several sensors.

A recent study at Pagan Volcano in the Northern Mariana Islands (1) demonstrated multiparameter seismo-acoustic observations of long-period signals from seismic, infrasound and buoy data can not only determine the azimuth to the source of the mcroseism disturbance, but can provide a means to compare the frequency typical of surf and those that are 'normal' for the volcano.

One of the major differences they found was when a typhoon passed 770km away from the sensors, these clearly showed the difference in the signal that ocean waves have on local surf induced microseisms - causing a peak that is not present on the volcanic microseism (as the volcano itself is not directly affected by the surf). In fact, the storm track could be tracked, something that was also done during Superstorm Sandy (2) - which presents another signal that is very different to volcanic microseisms.

The research and observations suggest that a feasible way of determining the origin of the sources to microseisms is to have an array of types and spacing of sensors.

Not the answer you're looking for? Browse other questions tagged geophysics ocean seismology volcanology ocean-currents or ask your own question.

11
What generates the microseism?

11
What happens to the higher frequency content of the tremors associated with a volcanic eruption?
9
What are the factors that dictate a given topology for seismometer placement around a volcano?
2
Which parts of the ocean have been explored?
0
If the earth were completely smooth and covered in water, what would occur with ocean waves?