What is the name of this feature on the Red Sea coast of Saudi Arabia?

This is between Umluj and Al Wajh on the Red Sea coast of Saudi Arabia. I can't find any kind of identification in English or Arabic.

So I am looking for the name and the category of this body of water and landform. To me, it seems to resemble a coral reef, but there are some islands.

The area you describe looks like the following (from Google Maps): 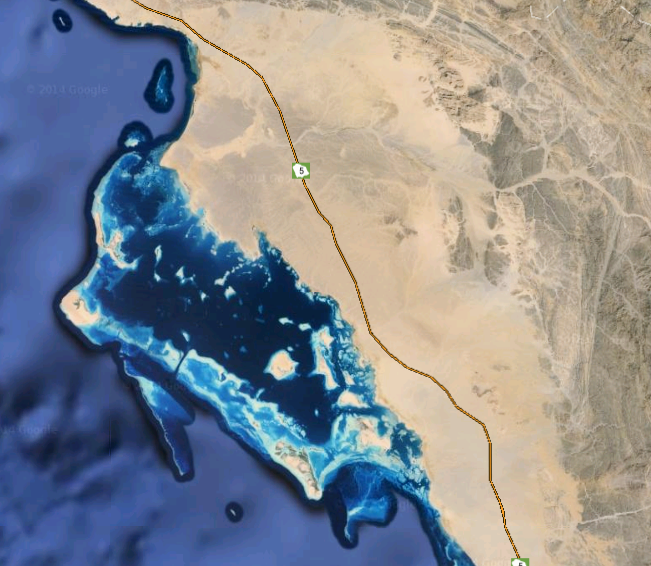 According to the World Atlas of Coral Reefs, a picture of this very reef appears on page 240. The caption for it describes the feature as being the Al Wadj Bank and consisting of fringe and barrier reefs.

There has been a relatively recent study of coral reefs along the Saudi Arabian Red Sea coast, of particular emphasis on reefs between the cities of Haql and Yanbu, published in the paper The Present Status of the Red Sea Coral Reefs between Haql and Yanbu, Saudi Arabia (Hariri, 2012). In the article, they describe that in terms of Red Sea reefs:

The literature seems to use both Al Wajh and Al Wadj for the spelling.

Not the answer you're looking for? Browse other questions tagged oceanography geography or ask your own question.

11
What causes these odd-looking currents in the Tasman Sea?
2
Why is this area apparently unpopulated in the great Buenos Aires, what is it?
2
How quickly can coral fossilize?
3
Before the artificial changes of the Aral Sea, what was its average depth and salinity?
1
What is the collective name for the seas of Indonesia?
5
How to interpret these kind of coordinates?
3
What was the size of the Aral sea in year 1000 CE?