Can miniature shells be seen in Earth's sand at this resolution?

Most of sand on Earth when inspected at close range reveal tiny shells as in sea shells.

Here is a picture of the Martian sand at a close distance: 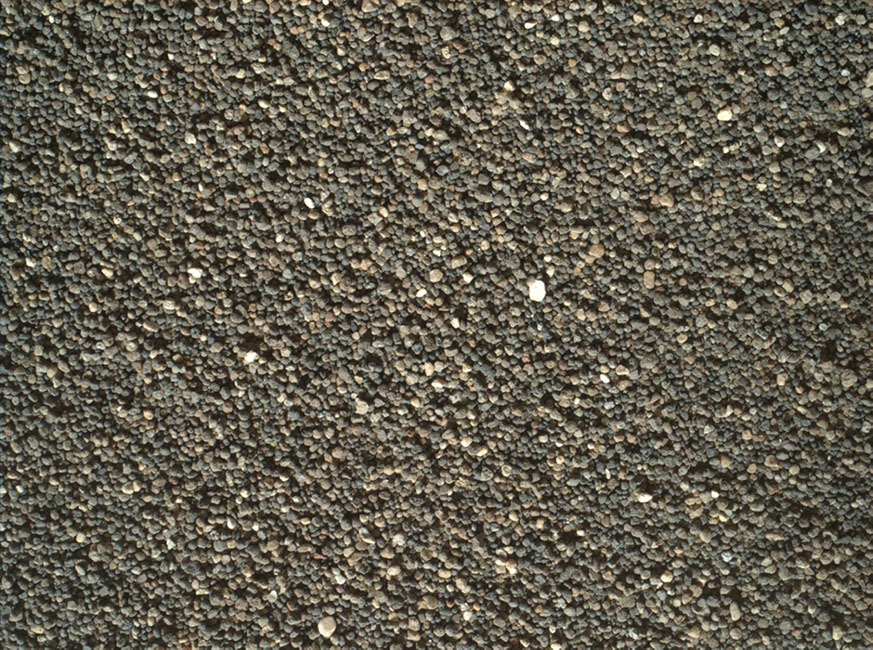 Can Earth's tiny shells be seen in sand at similar distance?

Yes, it is possible to see shells in that scale. It is also possible that there are shells that are smaller than you would be able to resolve.

An important point here is not only the shape of the sand grains (be it shell fragments, or some other shape) but also their composition. The vast majority of shells and shell fragments on Earth are made of calcite or aragonite (CaCO3). The rest are made of apatite (Ca5(PO4)3(OH)) and silica (SiO2). Curiosity has quite a lot of instruments on board for material analysis. Getting the composition of the sand, in addition to its shape, is just as important for identifying its source.

Firstly I would disagree with your premise that 'most of Earth's sand contains tiny shells resembling sea shells'. Such biogenic sand is certainly true of some biologically productive sedimentary environments, but certainly far from all. For example, try finding shells in most of the sand in the Sahara desert, or any other desert for that matter. You will only succeed if the sand is reworked from previous biogenic sandstone.

As to the resolution of shells at the apparent scale of your photograph, it depends upon the biota involved. The bioclasts vary from several millimetres to true microfossils - far below any visible resolution, and maybe even below resolution of small microscopes.

I assume that any close up photo of Mars sand would have been magnified, contrast stretched, and computer image enhanced. Had there been any bioclastic grains, I am sure it would have been front page news around the world.

Not the answer you're looking for? Browse other questions tagged mars or ask your own question.

13
Why does Mars' experience an 'ice age' at high axis obliquity, when Earth experiences an ice age at low axis obliquity
15
What is this strange feature on Mars in Valles Marineris
1
How are natural specimens, such as ‘Moqui Marbles’, distinguished from man-made artifacts?
10
What are the most similar Earth analogues to Mars' seasonally recurring slope linea?
5
What is serpentinization, in the context of disappearance of surface water on Mars?
8
What are Ordovican trace fossils, and what do they look like?
3
What do the little flags on these martian wind speed data points mean?
6
Considering the thin piece of material on the surface of Mars in the image below, is there anything like it on Earth?
26
Why is Olympus Mons the largest volcano in the whole solar system?
3
Is there really precipitation on Mars? Does frost count?