How much rain falls on the Earth each year?

In this resource, it says that the average amount of precipitation falling on the Earth per year is approximately 100 cm. Integrated across the surface of the Earth, that yields approximately 5.1 × 1014 m3 of water volume that falls to earth. However, it does not give an estimate of how much of that precipitation is specifically rain. So, how much rain falls on the Earth each year?

That's a tricky question, it will vary from year to year but we can narrow it down with some assumptions so I can give an answer. The assumptions will be:

The second one is pretty reasonable: look at the global distribution of precipitation on the era of satellite data (reference). 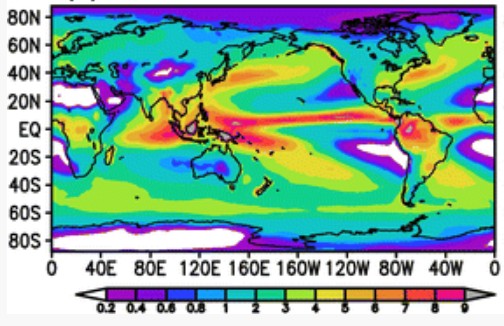 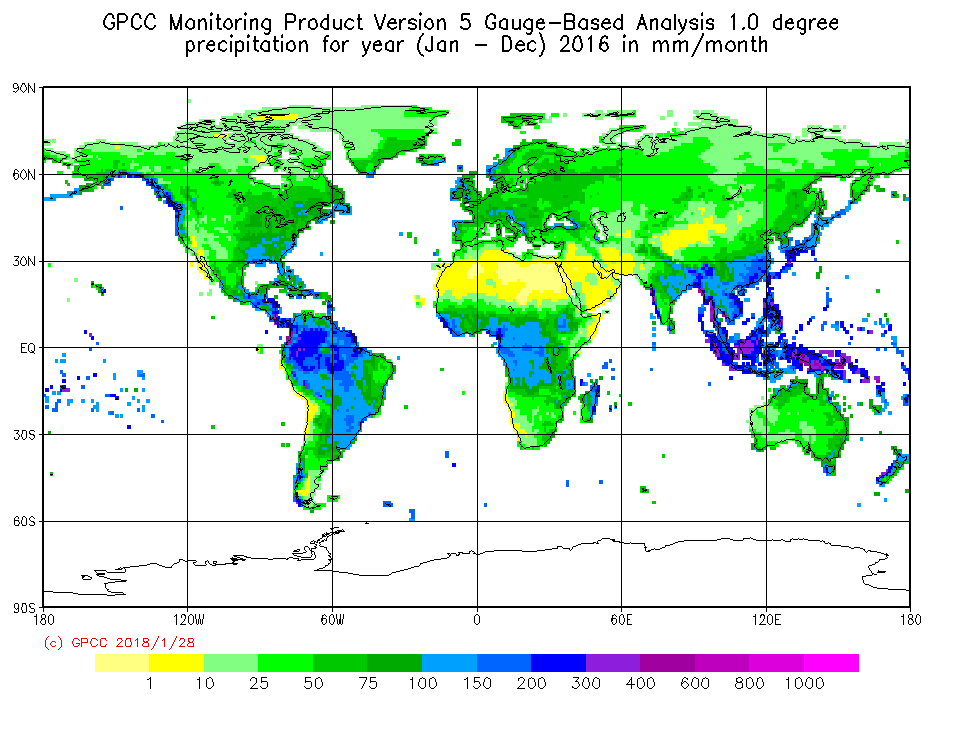 And the fraction of liquid precipitation on land: 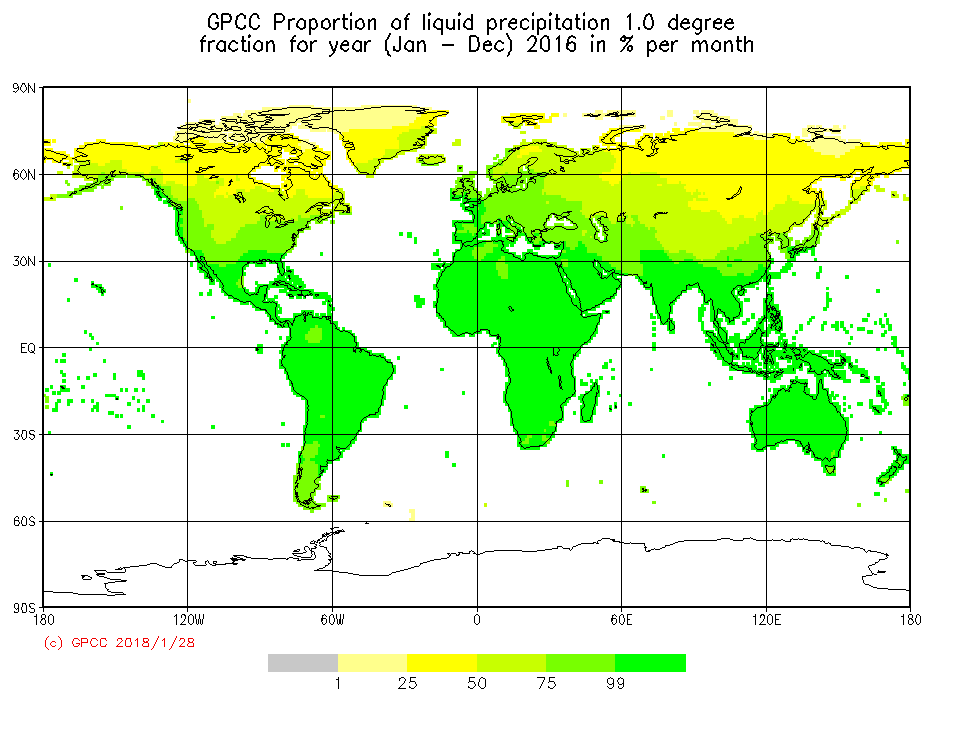 I've downloaded both datasets in ASCII format, and computed that the mean percentage of liquid precipitation is 74.1%, but we can't use that value, because it might be strongly affected by areas with little precipitation. So if we compute a cell by cell total SOLID precipitation per year, and multiply that for the surface of a 1°x 1° cell (considering the effects of latitude), we get a total of solid precipitation for 2016 of 1.5e13 m³.

So with the additional assumption that 2016 was a representative year. That will take your total precipitation of 5.1e14 m³ per year to 5.0e14 m³ per year of RAIN only.

Perhaps we should have expected that there is not much of a difference given that most of the rainfall happen on the sea (The total precipitation on land for 2016 was 1.1e14 m³ meaning that the 13.6% was solid and 86.4% was rain).

Now if you want to consider snowfall over the sea, I don't know of a model with such output product. Therefore, you can make a simple model or make some assumptions to use Sea Surface Temperature to figure out if precipitation will turn to rain at some high above the surface.

But again, if you look at the map of global distribution of precipitation, the fraction coming from latitudes at which you could expect sea surface snow is rather small, so the correction coming from snowfall over the sea is likely to be a pretty small one too.

Not the answer you're looking for? Browse other questions tagged meteorology precipitation or ask your own question.

11
If water is a renewable resource, why is there water scarcity?

16
What is the methodology to analyze future climatic extremes using the results of climate models?
5
Where can I get historic hourly precipitation data for Italy?
4
How can we calculate the total water mass that falls during a flood?
6
How does temperature impact the elevation distribution of orographic precipitation?
2
Estimating Average Rainfall
7
What are good metrics to compare climates?
5
How is heavy rainfall determined in National Climate Assessment
2
Estimation on how cold will my pond get - intent is to know if certain fish can survive in it
2
Creating a drought metric using precipitation data?
1
How are climate regions caused by both axial tilt and also by climate circulation cells?