Are we changing Earth's weather with global warming?

I think that when the air heats up in the day, the radiation from the ground contributes way more to its heating at altitudes more than 300 meters above the ground than convection currents of air heat from the ground.

If these assumptions are true, does the carbon dioxide we released into the air speed up the absorption of radiation from the ground by the air in the day and the radiative cooling of the air at night because Carbon dioxide absorbs infrared light better than air?

First, regarding your assumptions, here is a graphic from this online textbook. 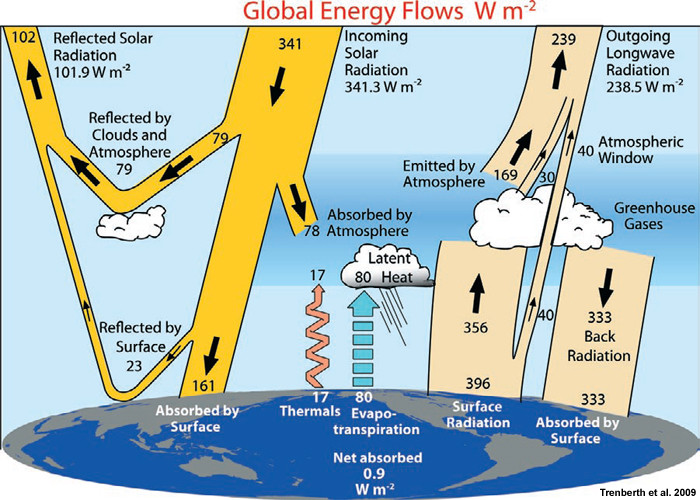 As you can see, your first assumption is correct, surface radiation is much more significant than thermals. Your second assumption is also correct, 'Back Radiation' and 'Emitted by Atmosphere' flows are significant, but absorption of heat by the ground from the air isn't even featured on this chart. So conductive heat transfer from air to ground is negligible.

This page gives some good background on how carbon dioxide contributes to global warming, and, as you said, it is due to absorption of infra-red radiation from both the ground and the air. Specifically, CO$_2$ absorbs IR wavelengths that can 'escape' absorption in water vapor (the primary greenhouse gas) in the range 12-15 $\mu$m, as shown in the graphic below.

With more thermal radiation absorbed in the air, less escapes into space, and the net energy balance of Earth is positive which results in a slow and steady warming.

I think the short answer to your question is "yes". Getting into the specifics though, it's a lot more complicated.

I can't speak to the specific RF and atmospheric interactions, but the changes to weather patterns and long-term climatic anomalies from climate change have been well established by climatologists. From my understanding, the issue with focusing specifically on land-atmospheric interactions at one altitude in the lower troposphere is that topography, land/water cover, latitude and existing weather patterns will have a more dominant effect and it'll be effectively impossible to determine changes based solely on RF anomaly.

For more info, it might make more sense to look over the IPCC AR5 Working Group 1 Technical Summary Report. Chapters TS.2 and TS.4 would probably have some specifics that could help clarify things.

3
Is it possible that a reduction in vegetation is a cause of global warming?
2
Why a stratus cloud does not always reach all the way to the ground?
4
Effective Temperature of a Planet and Surface Temperature due to Greenhouse Effect
0
Can anyone explain the reason why CO$_2$ increases global temperatures (not the simplistic greenhouse analogy provided for public consumption)?
3
Which type of plant absorbs the most net carbon dioxide per year per square km?
2
Why is dependence of radiation forcing on CO2 concentration logarithmic?