If there's more water in the atmosphere due to global warming, how are there fewer mountain glaciers?

As I understand it, moisture condenses at mountain tops to form the mountain glaciers that provide water. The mountain topography doesn't change much in the span of a few decades, so if there's more moisture in the atmosphere due to rising global temperatures, then it seems like there should be more water to condense on these mountains. But somehow, there's even less mountain ice, why?

Indeed some glaciers are growing and gaining mass due to increased precipitation (in part due to climate change and enhanced atmospheric water content). But that's the case only for glaciers in very cold places, like East Antarctica, where most glaciers appear to be growing at increasing rates (1,2). But unfortunately West Antarctica is pretty much a desert; the total precipitation on average is less than in the Sahara Desert. That is usually the case in very cold places. The capacity of air to hold dissolved water decreases exponentially at lower temperatures. Therefore cold glaciers (the ones that are most often growing) account for a small amount of the total global ice mass change.

In contrast, temperate glaciers (i.e. not so cold) constitute the majority of the most well known mountain glaciers (outside Antarctica and the High Arctic). These in many cases are receiving more precipitation, but the increases in accumulation are in most cases offset by the increase in temperature, which have a double impact:

That last point is not that intuitive, but as explained in this question and answer, warmer air carrying more moisture will develop water droplets quicker, therefore dropping most of the extra moisture at lower elevations. As a consequence, the rain-driven melt in the lower areas of the glacier will overcome the a moderate increase in the accumulation at higher elevations.

Also, there is a positive feedback kicking in against the glaciers: The more the glacier melts, the lower its surface will be, therefore it will be exposed to warmer temperatures leading to further melting, leading to more surface lowering, exposing it to even higher temperatures, producing even more melting and so on.

It is also important to note that glaciers grow due to snow accumulation. It is unclear to me if that's what you meant by "moisture condenses at mountain tops".

Finally, it worth noting that glaciers have been receding since the last ice age about 20,000 years ago (as we have learned from Oxygen isotopes on foraminifera deposits and glacier deposits), the recession slowed down the last ~6,000 years slowly approaching to a steady state. However, recent warming has just accelerated the process a bit, enhancing the extent and speed of the natural deglaciation, but we have to acknowledge that the glaciers were already out of balance and shrinking way before the industrial revolution.

More moisture in the atmosphere also means less orographic lifting is required to reach saturation. This should lead to rain or snowfall at lower elevations, where it would melt more rapidly and not contribute to snowpack.

Mountains are a little unusual in terms of water vapor capture. Temperature drops with elevation so some mountains have ice-cover even in summer and/or even in warm latitudes. Mountain ranges tend to block air-flow and if there's a prevailing wind direction, it's not uncommon for for the other side of the mountain to be desert. This is called a rain shadow. Death Valley is an example of a rain shadow with mountain ranges on both sides. The Atacama desert is another.

Rain shadows aren't part of your question, but the point is that Mountain ranges are especially good at pulling water vapor from the air and in cold enough climate, or if the mountains are tall enough, they're very good at creating localized glaciers that ebb and flow with the seasons.

I disagree with the sentence in the other answer of glaciers have been receding for the last 15,000 years. While somewhat true, given that you asked about mountain glaciers, that's a tricky assumption to make. Sea-level studies suggest that glacial melt, significantly slowed down to a very gradual sea level rise by about 6,000-6,500 years ago. If we assume (if I may speculate), a steady but gradual increase in East Antarctic ice, there has been some steady glacial melt globally over the last 6,000 years, but not a huge amount and whether mountain glaciers contributed to that is unknown. 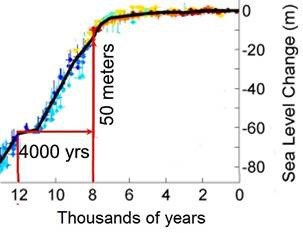 Getting to your question, When the weather is warmer and there's more water vapor in the air, the amount of water that mountain ranges catch should increase on average. That's 100% accurate, captured water only becomes glacier (or snow or frost), when the temperature is below freezing.

As the other answer points out, it's a combination of a period of time below freezing and the amount of water vapor in the air that enables the mountain glaciers to grow. But you also have to look at absolute humidity. Air tends to be high relative humidity over oceans but over land there's much greater variation.

Past those mountains, the air needs to fill up again with water vapor, sometimes called recycled water-vapor or secondary source water vapor. This secondary source comes mostly from rivers and plant transpiration, but as CO2 levels rise, plant transpiration decreases, so you have a double whammy effect, air that can hold more water, and less water vapor returned to the air. This means, by the time the air reaches the Rocky Mountains, there's often less, not more water vapor in the air, combined with a shorter winter season, and the glaciers can shrink significantly.

Regions that rely on secondary sources of water vapor, such as rivers and transpiration, can be especially vulnerable to climate change. Add to that, a decrease of snow melt from shrinking mountain glaciers upstream and you have a potentially serious water shortage issues . . . but I digress, as your question wasn't about water shortages.

No two mountain ranges are alike, so the details should be studied individually for each mountain range or region, but specifics such as where the wind that blows past that mountain gets it's water vapor from is very important, in addition to any variation in the time that mountain glacier spends above or below freezing. That warmer air holds more water is true in general, but it's not globally true as a result of climate change. Some parts of the Earth are becoming dryer as a result of climate change.

There's no shortage of articles that indicate that mountain glaciers are rapidly shrinking. Mountain glaciers that rely on secondary sources of water vapor are the most vulnerable.

Not the answer you're looking for? Browse other questions tagged climate-change glaciology ice glacier cryosphere or ask your own question.

6
How does temperature impact the elevation distribution of orographic precipitation?

3
Regarding the melting glaciers and icebergs, why isn't the extra water vapor in the atmosphere mentioned in discussions of global warming?
9
How do we use oxygen isotopes as temperature proxy?
8
What does global weirding mean regarding temperature extremes?
6
Ocean level rising, or the floor getting higher?
6
What is meant by controlling and reacting factor?
22
"Five of the Solomon Islands disappeared" due to sea level rise, how is this possible so quickly?
10
With so many positive feedbacks accelerating global warming, how did the earth ever re-enter ice ages after it came out of one?
37
Is climate change a vicious circle?
2
If we send ocean waters into glacier of north pole/south pole to reduce sea level, will it help global warming?
22
How does global-warming-triggered ice melting cause global sea levels to rise?